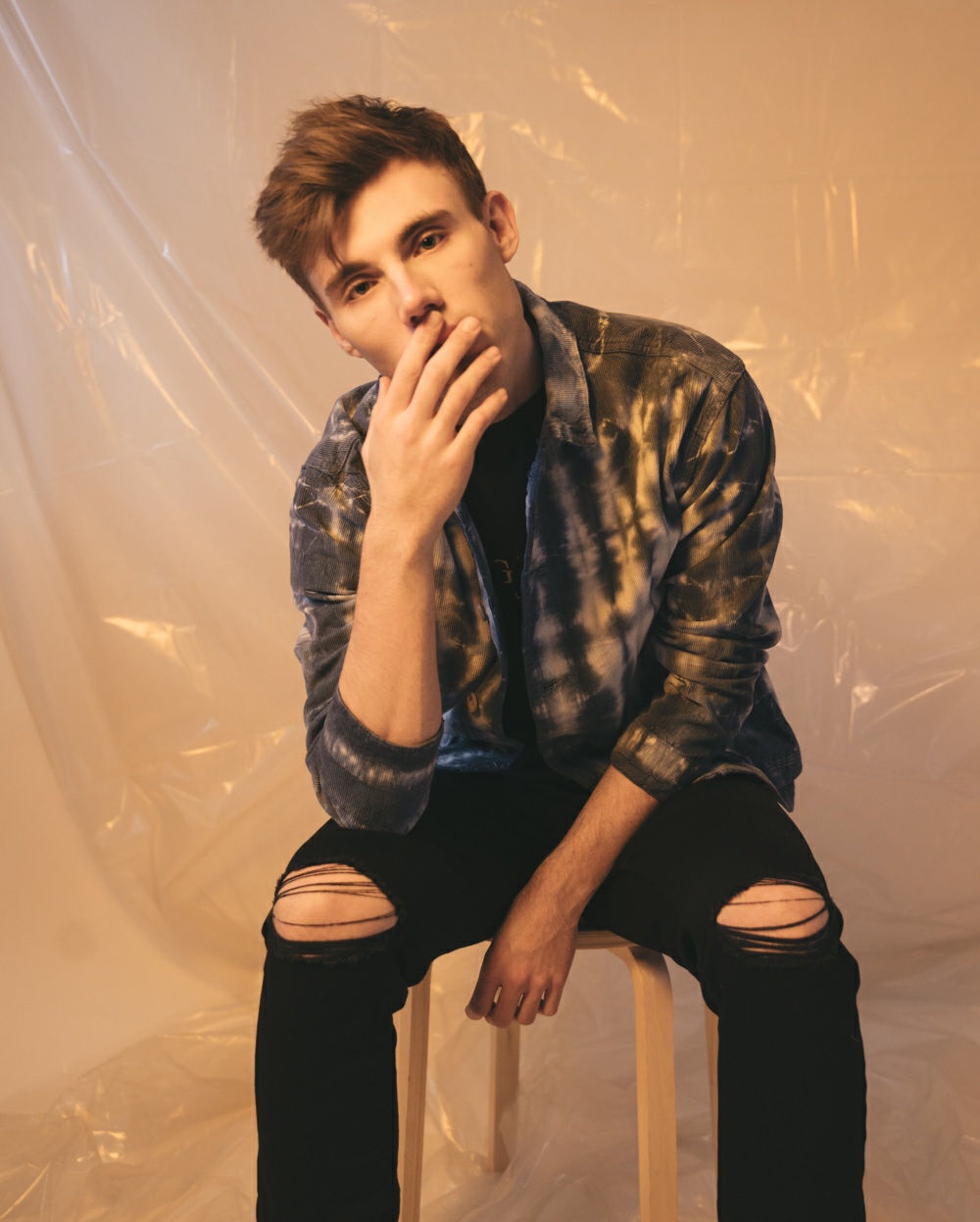 In today’s blog post of my interview series, I’ll be interviewing the young and talented pop artist Asher Knight (22). A young man from Bradford, UK, who can sing and dance. Asher started his music career not long ago in 2018 with his debut single Hurricane and Tornadoes, a beautiful romantic love song. He has released his debut EP Step Back last year in July and three new singles since then. Asher has also been on tour with different artists and bands like The Vamps, Boyzone, Roadtrip and All Saints. Therefore he has gained a lot of stage experience and an organic fan base. In this interview, we will chat about his passion for music, his quarantine lifestyle, and new music. Let’s start!

Dear Asher Knight welcome on erenblogs – Today’s Pop Music. I’m glad to have this opportunity to ask you some questions. Thank you for joining the interview series on my blog.

1. First, let’s get to know you better. How would you describe yourself in 5 and your music in 3 words?

Myself I would say: Honest, Fun, Reliable, Resilient & Caring.

2. What kind of music did you grow up with and which artists inspired you as a teenager?

The music that really got my attention were artists like Beyonce, Taylor Swift and Michael Jackson mainly.

3. Please name the first album you bought with your own money and the first concert you went on!

It was Beyonce’s album 4, it changed my life as that album made me love music on a new level but my first concert was Miley Cyrus, it was incredible and inspired me to follow my dreams!

In school, I was bullied and an outsider.

Well, I can totally relate!

5. I know you’re talking about your bullying story openly, so am I. I also have been bullied in school for several years and learned a lot about myself and how to stay strong. Pop music helped me a lot during this time. What would you recommend to your younger self from today’s perspective?

I would tell my younger self to keep focused on your dreams and things will get better. It’s hard at school and I felt like I lost hope.

6. I’d say 2020 has been a horrible crazy year for the entire world due to the pandemic. How did you spent/are spending your quarantine days?

Lockdown was hard for me at the beginning, I was doing so much and then I ended up by myself in London not knowing what to do. I eventually decided to do the thing I have always wanted to do and started studying for a qualification, which helped me have a focus. The main new hobbies have been cooking for me, very simple dishes of mainly chicken and fish.

7. I’m interested in a typical quarantine day of yours, did you come up with new habits? In my case, I was definitely eating more than usual and working out less, shame on me.

My typical day consisted of waking up around 9 am, even though I am not touring, I focused on new song ideas and thinking what’s next. Midday I would eat and go for a walk as being stuck inside was horrid so made sure I did my daily walk. Afternoons I start studying for my qualifications which takes a long time and has been hard work, but I enjoy it.

8. What did you miss the most during the quarantine?

Touring!! I love being able to visit new places, meet new people and being able to perform. Lockdown has been challenging because I can’t do it. Closest I could do was performing in front of my mirror for practicing.

9. What is one thing you’ve learned about yourself while being isolated from the outside world?

This is hard! One thing is I can cook food that tastes decent as being on tour lots I am never home cooking so being able to try new things has been great!

10. I wonder if there was a person, who made your quarantine days better? If yes, please tell us why!

I have been by myself over lockdown, but I am thankful for having amazing friends as we texted every day and face timed lots which helped.

11. How did you start singing and writing music? Did your parents support your passion?

I was always a performer, dancing & some acting but it wasn’t until I was 16 when I got injured and ended up having to go into singing lessons instead. I would be in the back hiding until one day my teacher said you need to do a solo, which I didn’t want to do at all. In the end, I sang Can’t Help Falling in Love and I literally fell in love with music from that moment onwards. My parents have been amazingly supportive, they support me in everything I do, which is incredible.

12. To which current major stars are u looking up to and why?

Currently, it would be Taylor Swift, everything from her stage shows to the music she writes is amazing. I am always blown away by her writing, it’s relatable and powerful.

13. Who are your dream collaborations, it can be any singer, songwriter, and producer?

Hmm, I would love to work with Max Martin, who has written and produced some of the best songs in pop. He is incredible and would be amazing to see what songs would be made.

14. Your first release of 2020 was Without Us. I must say that I love this upbeat pop track and for me, it’s definitely one of the best songs in your discography so far. The music video has reached over 400K views on YouTube and I’m sure it’ll reach 1 million by the end of 2020. What do you think, why did this single go down so well?

Thank you!! When writing the song, me and the producers talked lots about past experiences and this common thread of needing someone, so when writing the song, it felt natural, all of us on the same wavelength. I think the song is relatable to everyone and tells a story through the lyrics, which I think has helped the song work well with fans.

15. Your latest release Oxygen was released on the 24th of July this summer. I think it’s a perfect uplifting summer track. What can you tell us more about it?

This was written just before lockdown, a song about supporting each other, which is important but even more so over the lockdown. I had this concept of Oxygen being like a person, who is there for you and when going into the session I and two other songwriters just ended up writing this fun, energetic and meaningful song.

16. I know you have been on tour with The Vamps across the UK last year. I also saw them live on stage last year in Zurich on their European leg. And I can guess that you gained a lot of new female fans during the tour. I say that because I was maybe just one of the 20 men in the building at their concert. How was the touring experience with the guys for you? Are you still in touch with them?

The Vamps tour was insane. I loved every moment about it mainly due to the fans, they bring so much energy and positivity that when you’re onstage you feel excited to see them all and to enjoy the music! The boys are incredibly supportive, they watched my set a few times which is so nice, and they made me and everyone I work with feel welcome.

17. Since you have been on a UK tour together with other artists for multiple times, which cities are your favorites? Me personally, I love Manchester, but I haven’t been to London yet. Where should I go next in the UK after the pandemic ends?

I don’t have a favorite city as every one of them is so different, but Manchester does have a special place in my heart as it’s where I saw my first concert and being up on the same stage was hugely emotional for me. I knew I had wanted to perform there since my first concert, but I didn’t think it would actually happen.

Now It’s time for this or that:

Pizza or Sushi? I love both but sushi as it’s healthier.

Spotify or Netflix? Netflix, I love to binge-watching a tv series.

Coffee or Tea? Tea, I have never liked coffee oddly.

80s Disco Pop or Indie Pop? Indie pop but love a bit of 80s disco in the right setting.

Stadium tour or an acoustic session with few fans? Stadium Tour, I find small performances with few fans very scary while stadiums are not as scary, I think.

Summer or Winter season? Winter, as it’s easier to get warm than it is to cool down, I think most of the time.

18. I know it’s a bad year but let’s focus on the positive things. What was your highlight of 2020 so far? Every little reason to celebrate is enough, right?

The highlight of this year has been releasing music over lockdown. It wasn’t very easy but I have a great team around me which helps.

19. What are you most excited about to happen in 2021? what can you tell us about new projects, you’re working on right now?

Touring again, as I miss it so much!! There isn’t anything apart from wanting to go back on stage!

20. What do you feel when your stood-on stage in front of so many people?

I feel nervous but it feels like I am at home, the place where I belong most.

Was there an artist that made you fall in love with music?

Definitely yes. I never related to an artist’s lyrics and story more than Demi Lovato‘s. I’m a Lovatic since Camp Rock. Nicki Minaj’s music gave me confidence and power when I need it the most as a teenager. Olly Murs was a man and artist I looked up to. Just to name a few.

Thank you, Asher Knight, so much for taking the time to answer my questions. I wish you the best for your musical career and I’m looking forward to meeting you one day.

Support my independent blog with a little donation!

Or enter a custom amount