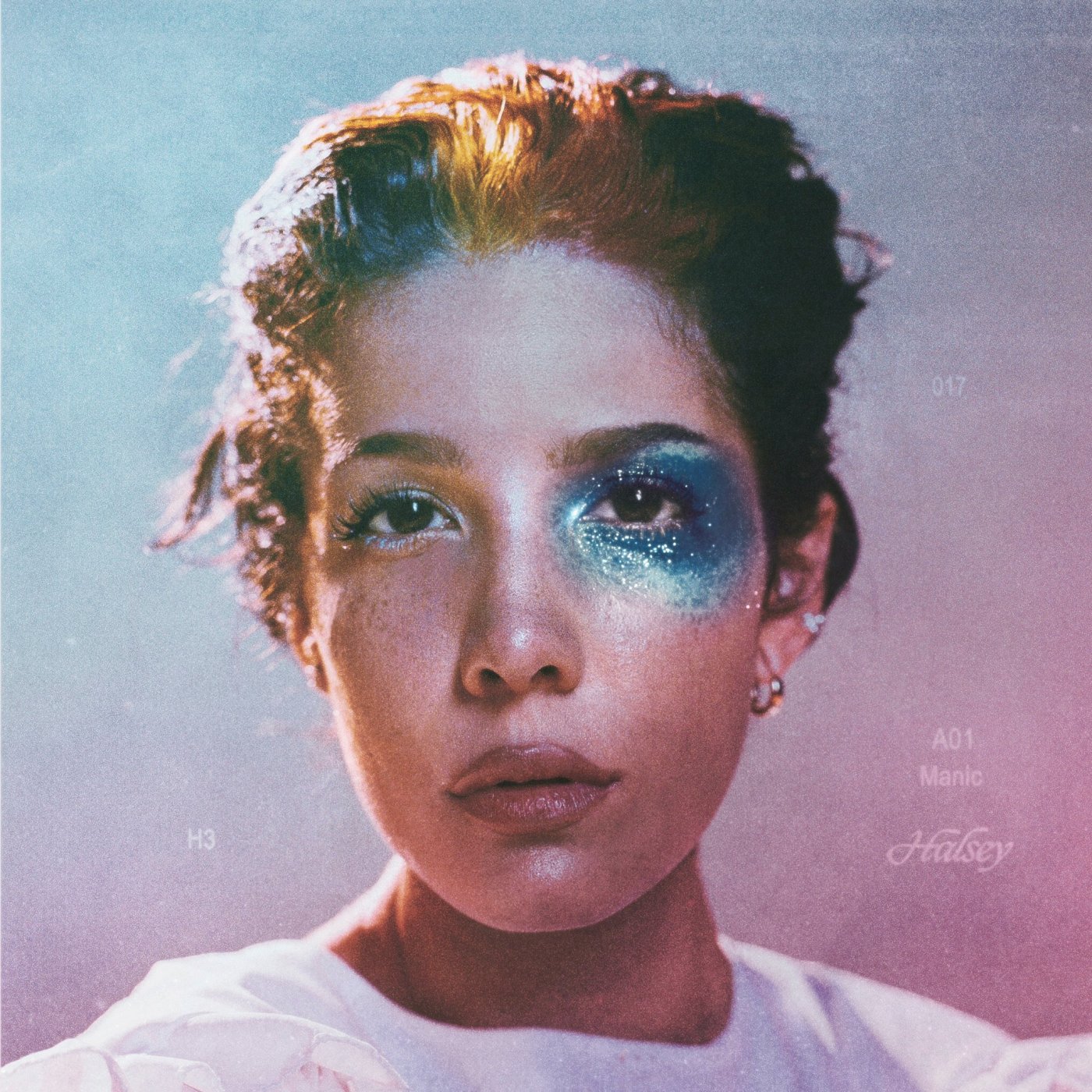 Halsey released her 3rd studio album Manic on the 17th of January. I fell in love with her and her music since the debut Badlands. Halsey is not a common pop artist; she has always been creative and inspiring on her musical journey. For Manic I had mixed feelings and wasn’t actually aware of what to expect. Therefore, I really wanted to review her new body of work and share my thoughts with you. And I know most of you love her music as well.

Let’s start with the singles of the album. Without Me was not meant to be her lead single in the first place but after an unexpected fascinating commercial success, her team must have changed their mind. Without Me is her first #1 solo hit single in the US. Since I was obsessed with this song, I even reviewed it last year. Here you go – Single Review – check it out! Also confusing was that Nightmare, which is a great dark rebellious track, was supposed to be the lead single, but was taken out from the album later on. Halsey explained this decision with the tweet: “I sat down to make a dark mean album and found nothing but calm, introspective, acceptance in my heart”. I was sad about it because I love Nightmare and I think it still would have been a great contrast to the rest of the songs. Halsey then released Graveyard last September as a foretaste of her upcoming album. Now she was singing about being in love with the wrong person and even following them to the graveyard. She wasn’t mad anymore but the track was still upbeat and the chorus dynamic. I must say I couldn’t connect with this single as much as I did with her earlier releases. Halsey continued to bombard us with other singles.

She released clementine at the end of September on her 25th birthday. On this introspective track, sounding childish and fabulous, Halsey imagines her ideal world and talks to a nonexistent lover. Even though she claims that she doesn’t need anyone, she knows that she needs someone. We got the same lyrical content on I HATE EVERYBODY, which makes Halsey kind of repetitive on the record. I don’t think that clementine was single-worthy. It didn’t achieve any commercial success, just like her following single Finally // beautiful stranger. I actually really liked this slow acoustic love song with a calming melody and story-telling lyrics. Halsey wrote it about her ex-boyfriend Yungblud, whom she dated last year. You should be sad, is definitely the masterpiece of the album, it was released one week before the record with a scandalous music video, in which Halsey rides a horse naked. She exactly knew that this would be her last chance to get back commercial attention. However, I think everyone loves this country-influenced pop song with a mad Halsey singing about heartbreak again.

Besides the singles, Manic has so much more to offer with sixteen tracks in total. Ashley the intro track, named after her real name, is a poetic introspective start with dark and serious lyrics. Halsey worked with the famous producers Cashmere Cat and benny blanco on this one, but the track is rather focused on the lyrical content than its production. All these facts also count for Forever … (is a long time), which also sounds similar to clementine. These two tracks are too experimental to be seen as pop songs, they’re rather written like interludes. If you know me, I hate interludes or short tracks on albums in general. In my opinion, they’re just unfinished songs and function as placeholders. Manic counts even three of them. Let’s take a look. Dominic’s Interlude isn’t interesting and sonically pleasant at all. So, I allow myself to continue with the next one. Ok, take a deep breath cause this one is crazy! Alani’s Interlude is the part of the album, where Halsey embraces her bisexuality, just look at these lyrics: “Your pussy is a wonderland and I could be a better man. And my girl, she always wore a skirt in the classroom, eatin’ my dessert in the bathroom”. Yeah, I was shocked too. Alanis’ vocals during the chorus just sound awful, to be honest. SUGA’s Interlude is sonically more pleasant but we can’t understand SUGA’s verses anyways unless you speak Korean. I believe that this interlude was a collaboration just to achieve more commercial success since BTS and K-Pop have become more popular and due to the fact that it was also released as a promotional single before the album.

If you want to dance to a track on this album, then 3am is your crazy upbeat rock n roll anthem. Halsey wrote it about the lonely moments you have. When you return from a night out with your friends but still feel lonely deep inside. And you desperately look for someone to talk to just to keep yourself far from your own thoughts. I think it’s relatable to everyone. This new era of social media is really toxic to our social lives. If there wasn’t a You should be sad on this album, 3am would have been my masterpiece of this record. The rather dark and furious killing boys represents Halsey’s attitude after a breakup. For the title, she was inspired by the horror movie Jennifer’s Body (2009, starring Meghan Fox), well represented in the intro. I must say I don’t like the melody and the production of this track. It doesn’t sound new, since the way she sings no more and anymore will remember you of the track More. These two songs together can cause a more-poisoning. However, just to say it once again her single Nightmare would’ve been great next to killing boys. Speaking of More, you can definitely recognize Cashmere Cat’s typical futuristic production in it. But this story-telling track has so much more to express on a personal level. Halsey admitted that this one was the hardest to write since she opens up about her endometriosis and miscarriages. This lullaby-like track is dedicated to her unborn child, whom she just wants more. It’s a touching must-listen for Halsey fans.

If you’re looking for an exquisite production you have to listen to Still Learning, which Halsey co-wrote with Ed Sheeran and Louis Bell. Sonically a masterpiece and regarding the lyrics it’s a self-love anthem. In my opinion, Halsey is one of the most confident artists out there. Therefore, I was shocked when I listened to this track for the first time. I couldn’t believe that she’s still learning to love herself. She also described self-love in an interview as a journey and not as a destination. I hope that she’s going to release this one as a single. The poetic outro track 929, named after Halsey’s birthday (29th of September), is probably the most honest song on Manic. Halsey said that the freestyled lyrics are confessional about her family and fans. She especially references her life before and after becoming famous and even picks up her relationship with G-Eazy. What I love about this track is the smooth guitar-riff. Halsey proofs that not much of production is needed to have an inspiring track. It’s a great way to end the album since Halsey mentions everything that inspired her to write this record.

When I streamed Manic for the first time I wasn’t impressed right away, but I must say that most of the non-singles grew on me later on. Just like Selena did on Rare, Halsey also worked with Finneas, Billie Eilish’s brother, on a track. Finneas co-produced Lose You To Love Me for Selena and I HATE EVERYBODY for Halsey. After he produced the most-selling album of 2019, he must be getting a lot of requests to work with major artists. I’m sure that I’ll see his name more often.

Manic is probably Halsey’s most personal album so far and I can’t wait to see her live on the European leg of her Manic World Tour this spring. Her stage presence and performances are always fascinating.