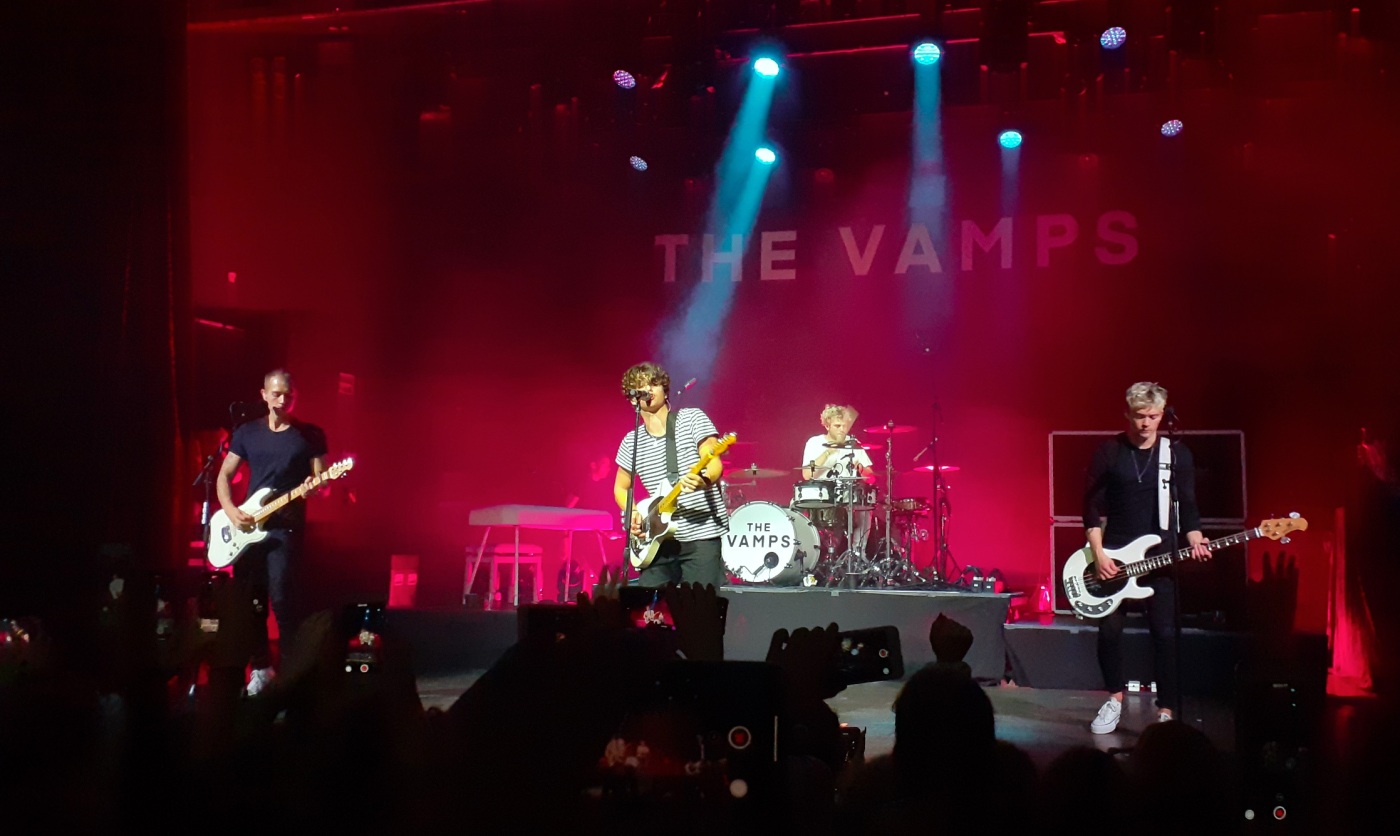 After being a fan since their formation in 2012, I finally got to see The Vamps live on tour. I still remember watching their cover video of 22 by Taylor Swift on YouTube. The British boy band counts the members: Connor Ball (23, bass), Tristan Evans (25, drums), James McVey (23, guitar) and Bradley Simpson (24, lead vocals, guitar). Not only did I enjoy their covers online, but also their original music as soon as they started to release it. The songs Can We Dance and Somebody to You will always have a special place in my heart. But I also enjoyed their next records Wake Up and Night & Day. It was their third time playing a show in Switzerland but I never got the chance to see them before. So, thanks to abc Production Switzerland my unrealized teenage dream has finally come true.

The concert was at X-TRA in Zurich on the 8th of November. I was still recovering from my cold but I went there with my dear friend Jacqueline, we also saw 5 Seconds of Summer live together a year ago. It felt like a Deja Vu just with another band. The door opening was at 7 p.m. and we queued shortly before, the security check ran smoothly. First thing I noticed inside was the merch, I really liked their collection, most of the pieces were beautifully designed. As expected, there were a lot of girls, aged between 14-22 and surprisingly most of them didn’t use the men’s room. Just by chance I also met two girls from my high school, we graduated the same year. Four of us had a nice chat while waiting for the support act. 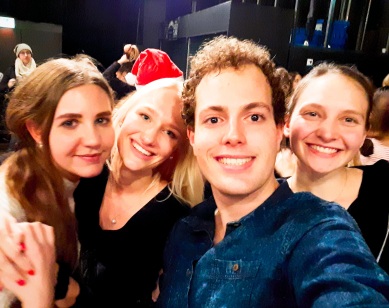 Support Act: Eliza and the Bear

A British boy band as a support act for a British boy band, nothing can go wrong right? At 8 p.m. the four guys started heating the building with their indie rock-pop songs and catchy melodies. Starting their set with Higher the energy in the crowd got high immediately. Most of the fans and my friend Jacqueline loved their cover of Teenage Dirtbag by Wheatus. Since I don’t know this hit song from the early 2000s, I couldn’t understand the hype. We could enjoy the charismatic boys for half an hour, while they promoted the self-titled album and their newest record Group Therapy. The song Where Have You Been is definitely my favorite so far.

On-time at 9 p.m. the boys started the night with some energetic upbeat singles Just My Type and Personal. But Bradley changed that immediately when he sat down at the piano to sing the chorus of Personal one last time with us in an acoustic version. Right after, it was time for the first speech and Bradley welcomed us to the tour and asked us how our year has been so far. He was very friendly and adorable. With his babyface he will always remain a cutie for the fans. Even though it was my first time seeing them live it didn’t feel like that, they seemed so familiar to me. Then, they took us back to 2014 with the song Wild Heart and made everyone jump. The tropical house singles All The Lies (Alok, Felix Jaehn) and We Don’t Care (Sigala) turned X-TRA into a club. Tristan interrupted the show and asked us to sing Happy Birthday for one of their crew members and at the end of We Don’t Care Tristan and Connor had some impressive solo parts and showed us how well they can play their instruments.

For the next song, the boys took their acoustic guitars and Bradley started joking that he has a very special guest for the next song Demi L… but we all knew it couldn’t be the case. However, as a Lovatic I would have enjoyed seeing them performing Somebody to You together with Demi Lovato. But he asked us to be his Demi and they played a really romantic slow acoustic version of the song. I couldn’t enjoy it at all, I love the original upbeat and uplifting version. But the crowd accompanied them with their flashlights while singing along. During Waves they alternated their instruments, Bradley now sat down behind the drums, Tristan played the electric-guitar and Connor sang for us.

By the way, I enjoyed their British accents every time they spoke, it made them appear cuter than they already are. The show continued dynamic with Middle of the Night, Bradley even climbed to a platform next to the stage and sat down on the edge, so that his legs were hanging above the crowd. A fan had the chance to give him a self-made drawing. It was definitely a highlight of the show. Another crazy fan threw a stuffed animal to the stage and hit Connor right by his head and interrupted James’ speech. Bradley asked her if she was training for the Olympics and Connor just said: “it was quite heavy”. Afterward, it was time for one of my favorites What Your Father Says followed by the fan-favorites Last Night and Hair Too Long. We enjoyed pure nostalgia with Can We Dance and sang along. The Vamps closed the main set with their rock-pop love anthem Wake Up. 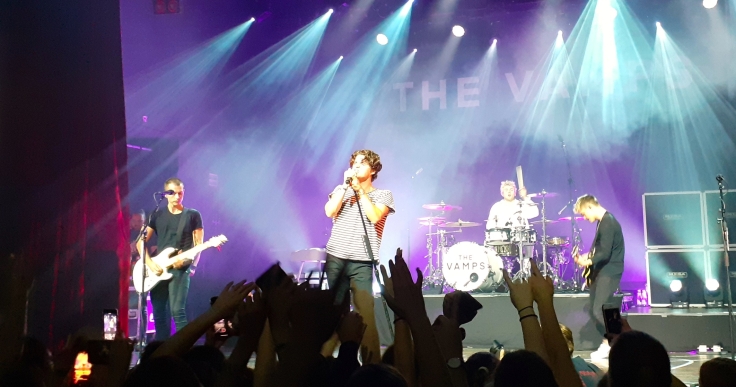 For the encore, I expected two more songs but the generous boys played four more. How could a fan ever complain about this? During the powerful track Cheater Bradley couldn’t fit himself to a spot, he stood on the bass drum, then enjoyed some touching hands in front of the crowd. In another speech, he asked if we were enjoying ourselves and wanted to know if we came with a friend or with a loved one. And who was on a date, there was one couple in the audience on a date, so they got all the attention. The next question was, who in the audience was in love and if we would do anything for our lover. I was just thinking that everyone was in love with him right at this moment. Then it became clear that he was introducing the next song Risk It All. Another fan threw a Santa hat to the stage and James had to wear it during the beautiful piano ballad Miss You. It was the most emotional moment of the night when Bradley sang and played the piano for this one. To finish the concert they performed All Night and I wasn’t expecting so many fans to freak out during the last song. 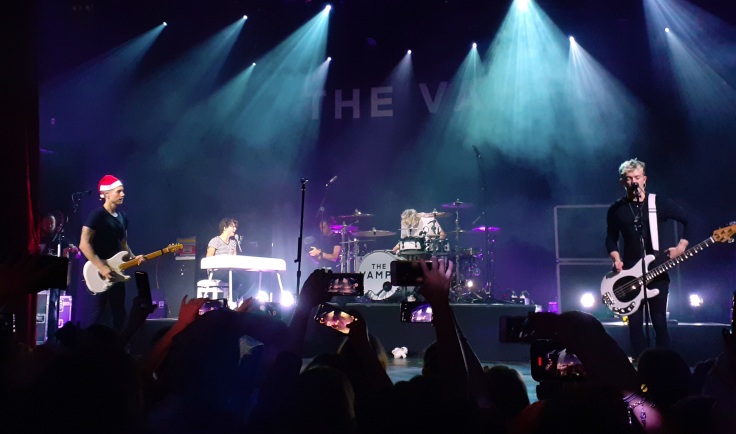 The boys performed for more than 100 minutes, what’s actually unusual for a pop concert. However they got so much energy and enjoyed performing, so we loved every single moment of the night. Bradley’s vocals were always on point. Even though they’re still young,  we could see how professional and experienced they are with live performances. I wish at least Bradley would have changed his outfit for once but no they all kept their black and white style until the end. All in all, it was a very pleasant enjoyable concert. Their Four Corners Tour is unfortunately over, but I’m sure they will go on tour again as soon as they release new music. And then you shouldn’t miss them if they play near you. Check out my Instagram for some high-quality concert videos. I want to thank abc Production Switzerland again for this unforgettable opportunity.