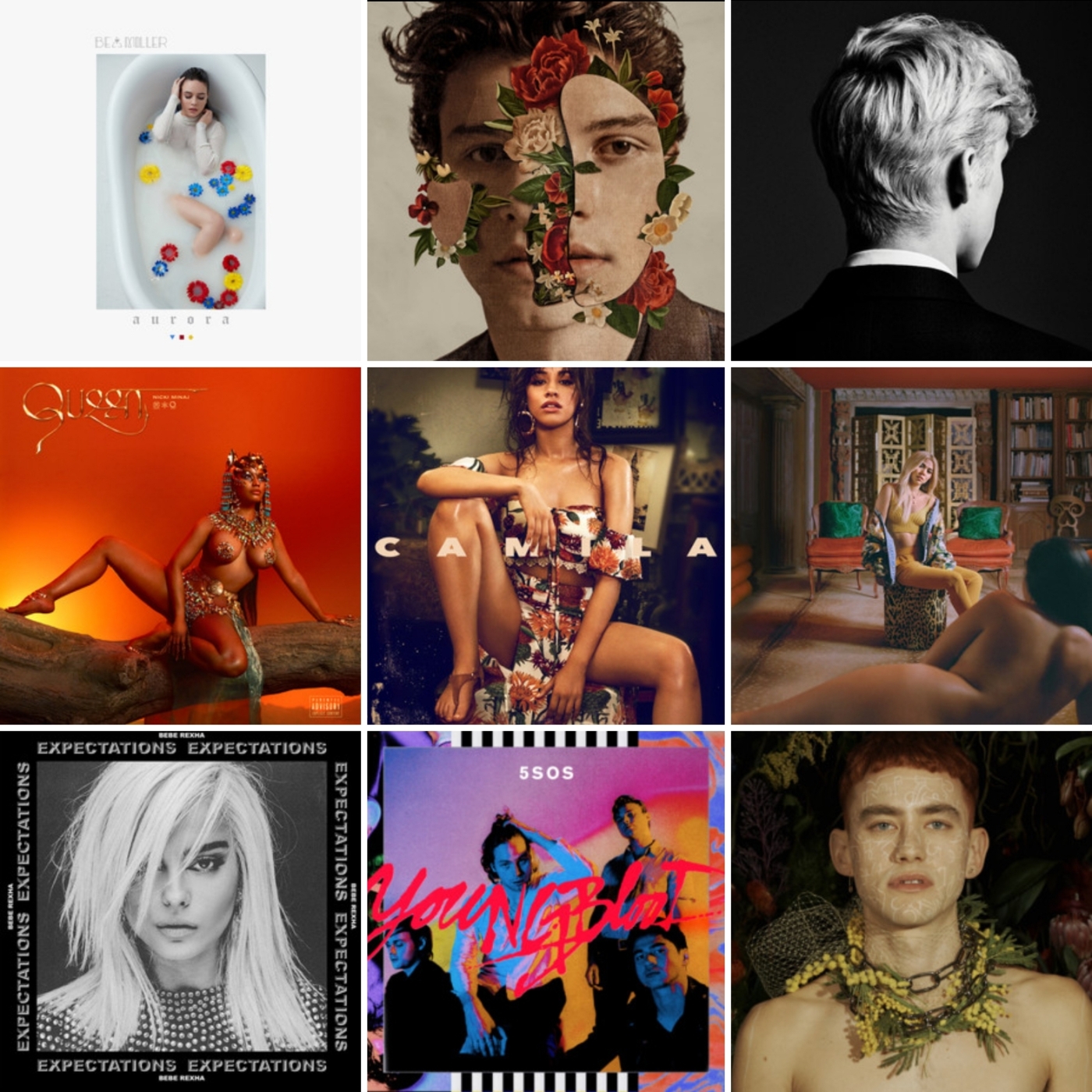 In this blog post, I’m going to present to you my top 20 pop albums of 2018. This blog post consists actually of two posts. In this one, you will see the top 10. Before we start, I want to mention that I’m always on the search for new pop artists and albums but I’m also listening to the chart-topping artists. So, with my top 20 pop albums chart, you can expect to discover new artists and also being happy that maybe your favorite pop album made it to my list. I mentioned my favorite songs of each album, if you want to listen to an album then you’ll know with which songs to start. I’ll also link reviews of the albums if I have written one, so you can get detailed information about the artist and the album. Let’s start!

Felix is another young talented Swedish pop singer just like Benjamin, who got me also obsessed with his debut album. I have listened to many songs on repeat. Swedish producers really know how to make good pop music. Benjamin and Felix do the same thing but they aren’t competitors, they are rather best friends. They were together on tour all around Sweden and have ruled the hearts of many teen girls. Before his debut album, Felix actually used to be in the famous Swedish boy band FO&O during 2013-2017. He definitely made 2018 the year of his solo career.

My favorites: Imprint, Everything Is Great, Hands On You, Trouble, Are You?, Tone It Down, Every Single Day

Troye Sivan is probably the most friendly and likable pop singer of our time. He released his second studio album last summer. I must admit that I wasn’t satisfied with only 10 songs but quality over quantity, right? His song “Dance To This” featuring Ariana Grande was definitely one of my summer jams. I still can’t get enough of this song it always puts me in a good mood. Unfortunately, he’s not coming with his European tour to Switzerland but I’m still excited to watch his live videos on YouTube.

My favorites: Seventeen, My My My!, Bloom, Dance To This, Plum, Lucky Strike

I could punish myself for having slept on this legendary album. I streamed the album during summer and got stuck with the songs I liked on first listening and didn’t give the entire album a chance to grow on me. I regret it so much. I relistened to the album last November again when I decided to go to their concert in Zurich. It was one of the best decisions in my life. The rock-pop album is a masterpiece, the concert was an unforgettable experience. If you’re still sleeping on this album you have to change this immediately.

My favorites: Youngblood, Want You Back, Valentine, Talk Fast, Moving Along, If Walls Could Talk, Better Man, More, Why Won’t You Love Me, Monster Among Men, Babylon

Bebe is also one of the singers who finally dared to release their debut albums. I already became a fan of her with her 2 EPs from 2017 “All Your Fault: Pt 1 & 2” and with her singles since 2016. Bebe knows exactly what her fans expect from her and she hasn’t disappointed them so far. Her secret weapon is probably that she has been in the music industry for many years as a songwriter for other artists. Now all I expect from her is a European tour with a stop in Switzerland.

My favorites: Ferrari, I’m a Mess, 2 Souls on Fire, Shining Star, Knees, I Got You, Self Control, Sad, Mine, Meant to Be.

Hayley managed to make me fall in love with her music. 2018 was her breakthrough year as a new talented artist. She is one of the few female singers, who represent their homosexuality in their songs and music videos. She is definitely the first successful artist with these intentions. Hayley is an inspiration for the lgbtq+ community but her pop sound is still meant for everyone. I’m so excited to see her live next month. I’m sure she will keep inspiring with her future releases.

My favorites: Feelings, What I Need, Sleepover, Under the Blue, Curious, Wanna Be Missed, Let It Be

Nicki Minaj finally released her highly anticipated fourth studio album last year. Her fans had to be patient and wait 4 years for this moment. But the Queen of rap came back with a well-deserved title. I’m a huge fan of her since her debut album and I must admit that “Queen” isn’t my favorite album by hers. “Pinkprint” is the masterpiece we got from her. However, she has released an album with 19 tracks and I have my favorites. Nicki is also one of the artists that I will see live on tour this year. A teenage dream of mine will finally come true after 9 years. Nicki Minaj is and will be my rap Queen.

I’m a huge Years and Years fan since their hit single “King”. Last year their second studio album was released and I was really inspired by this conceptual album and was ready to dive into the world of Palo Santo. The lead singer Olly opened up about his personal life in the songs and told us his stories. It’s one of the albums you wouldn’t skip any song while listening to it. You should catch up with this album if you’re still sleeping on it. It was also quite underrated for an unknown reason. I really enjoyed the album and not just because I’m a fan. There are many dance-pop tracks you would love to her at a party and dance to it. And the song “Howl” is my personal anthem, I can perfectly relate to it.

My favorites: Sanctify, Hallelujah, All For You, If You’re Over Me, Karma, Hypnotised, Rendezvous, Lucky Escape, Palo Santo, Howl, Don’t Panic, Up In Flames,

Bea Miller released her second studio album last year. And the album has an amazing concept and is telling how to heal after a breakup and how to fall in love again. I think the entire world slept on this album except her fans and me. But she really brought back the classical pop sound we all missed. The album will definitely grow on you and you will sing along to the songs in your car. I really hoped for her that 2018 would be her breakthrough year but after the release she became silent and she still is. Give this album a chance and let’s wait and see what this talented young girl was planning for us next.

My favorites: song like you, burning bridges, i can’t breathe, like that, buy me diamonds, outside, girlfriend, warmer, repercussions, S.L.U.T., crash&burn, to the grave

Shawn Mendes released his self-titled third studio album in spring 2018. I was focused on the singles way too long and I slept on the album until I wrote a review on it. While reviewing I fell in love with this project. I was never a huge Shawn fan until this record dropped out. Let’s admit that he is the new Justin Bieber in the pop music and we all love it. I really hope to catch him on tour this year. For more details check out the album review!

My favorites: In My Blood, Nervous, Like To Be You, Lost In Japan, Because I Had You, Youth, Queen, Perfectly Wrong,

Camila released her self-titled debut album exactly one year ago. and she literally smashed the charts with it and with her single “Havana”. The album counts 10 songs and I can say that I love them all. It’s an album to which I can relate to as a young man in his early twenties. The album debuted at #1 in the Billboard 200, well deserved. Later on in 2018, she had her own worldwide tours and she also was a support act for Taylor Swift. 2018 was definitely her year. By the way the song “Into It” was my most streamed song on Spotify in last year. Let’s see if she is going to take a break or will keep it on while she is on the top.

My favorites: Never Be the Same, All These Years, She Loves Control, Havana, Consequences, Real Friends, Something’s Gotta Give, In the Dark, Into It

What was your favorite album of 2018?