Halsey released a new single called Without Me on the 4th October. It’s not the lead single of her upcoming album but it’s still a hit song.  And I’m feeling this song so much, all the emotions and the influence of her personal experiences. I love the sadness, the pain, the confidence and her bad attitude in her vocals. I’m just like: “sing it girl, sing this song out loud, let them know!”. Obviously, I am a big fan of her, since the day I saw the music video of her single New Americana on TV back in 2015. I love her debut album Badlands and her second studio album Hopeless Fountain Kingdom. Therefore, I’m very excited to listen to her third album, which will probably be released next year.

My favorite songs of hers are Sorry, Strangers, Hurricane, Ghost and of course my anthem of the year 2016 Closer a collaboration with The Chainsmokers. I also had the chance to see her live on tour as a support act for Justin Bieber’s concert in Bern, in summer 2017. It was a perfect concert but I was very upset and angry, when I realized that Justin didn’t invite her to the stage to sing their duet The Feeling together, we had to listen to a playback Halsey instead. I mean this is a big no go if you already have the artist in the house. Shame on you Justin! 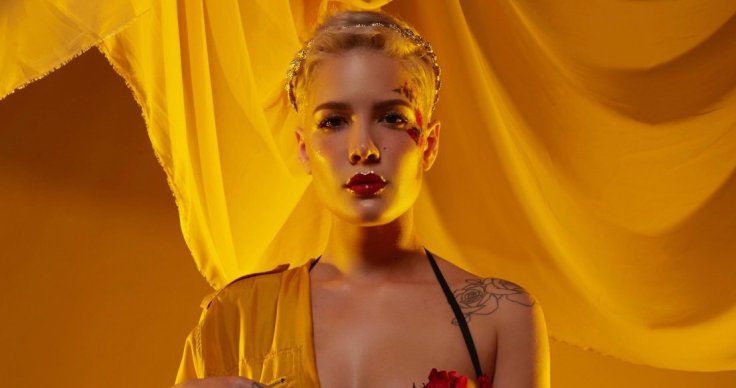 You have probably heard her new single Without Me before, right? Currently, It’s #5 on the Spotify Global Chart and #6 on the Billboard Hot 100. Do I have to mention that she dated the rapper G-Eazy? They have a song together called Him & I and I’m sure you already have heard this one too. Unfortunately, they aren’t dating anymore. I don’t think that this single is about him since the song came out while they were dating. But the media loves drama and they just assume it, good for Halsey because the song gets more attention this way. She told in an interview that this song is about realizing to be used by many persons in your life. You’re the one, who gives the most and you almost get nothing back from them. Halsey said that she has no longer contact with such persons. Let’s look into the lyrics.

In the first verse, she is singing about how much she took care of her lover when she found him broken down on his knees.  In the pre-chorus, she helps him up and puts him back on his feet. But he uses this chance just to take advantage of her. She admits having been blinded in love with him during the second verse. Then in the bridge, she finds out that he has cheated on her. Therefore, Halsey wants to know in the chorus from him how it feels up there in the sky, does it ever get lonely? And she knows exactly, that she is the one who put him up there. She now wants to know if he can live without her.

The production has rather been kept simple but it is a perfect match with her vocals and that’s what matters for me. She wrote the song together with Delacey, who also co-wrote for Demi Lovato, Madison Beer and Zara Larsson. The producer is Louis Bell, he produced many number one songs by Post Malone and also co-produced Havana by Camila Cabello.

Halsey performed her new single for the first time live on the EMAs (MTV European Music Awards). I really adored her performance. The rain effect at the end washed my consciousness away. The music video is also fascinating. She is telling a story in it, how problematic it is having a troublemaker as a lover. It remembered me of Taylor Swifts music Video for I Knew You Were Trouble. Let me know if you agree. Last week she also performed this song on the Victoria’s Secret Fashion Show. What a promo! I’m so proud of her.

Thanks for reading this blog post, let me know if I should write single reviews like this more often. This was my first single review on my blog. As you know I only reviewed albums and EPs so far. I hope you enjoyed it.