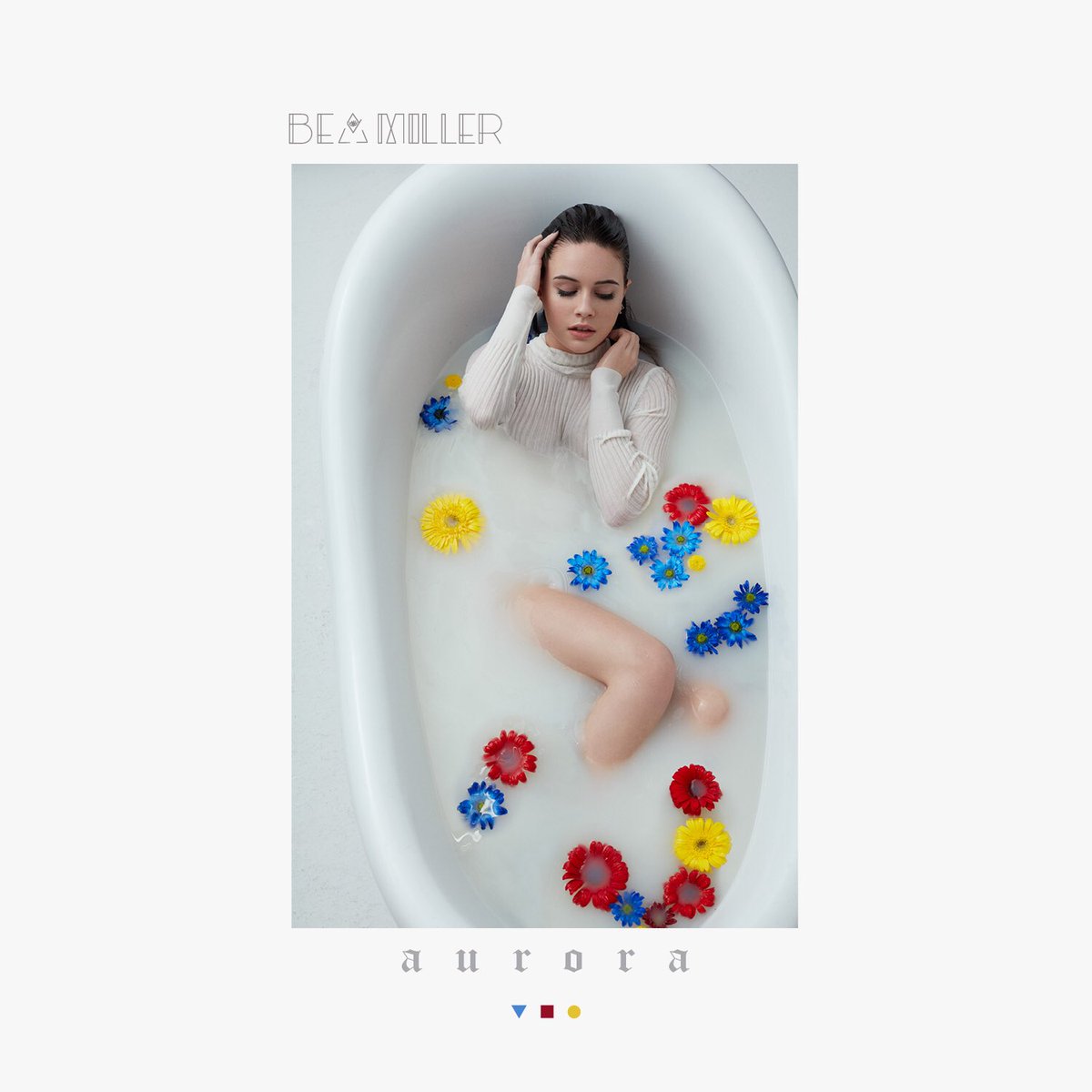 The nineteen years old American singer Bea Miller released her second studio album “Aurora” on the 23rd February 2018. Bea participated with 13 years in the TV show “The X Factor (US)” in 2012. She didn’t win the singing contest, but luckily, she got signed by Hollywood Records. After the release of her debut album “Not an Apology” in 2015 she toured with Demi Lovato, Fifth Harmony and Selena Gomez all around the USA. Bea admits that her debut album was a product of her label since she didn’t co-write on many songs. Therefore, for her second album, she decided to co-write on every song. She wants her fans to hear her story and what she has to say. Bea Miller is not a little-inexperienced teen singer anymore. She knows what she wants. The first evidence for this change was her single “Yes Girl” released in 2016. For the 2nd album Bea had a special idea. Before the album came out she released three EPs, she calls them chapters, every chapter includes three songs, there are also music videos for every nine songs. Each chapter is represented by a color and some specific emotions. Here is a little overview.

Bea combined the nine songs with five new ones and called the album “Aurora”. A goddess from the Roman mythology, who renews herself every morning and flies across the sky to announce the arrival of the sun. Now let’s look closer to these 14 songs.

Bea starts her album with this soulful song. She imagines how her boyfriend would be if he were a song. With every idea, she realizes that he is not the right one for her and she is just wasting her time with him. The effects of the realization of an unhealthy relationship will probably appear in other songs of the album. I really like the powerful beat and vocals in this song, they match perfectly.

In “Burning Bridges” Bea has broken up with her boyfriend, but she has struggles to move on. She is missing him and is hoping that he would fight to save their relationship. Her ex-boyfriend seems to do the opposite he lets the bridges burn. Bea admits needing him but there isn’t a way back anymore. While listening to this song you can clearly feel the anger and the suffering in her vocals. The post-chorus sounds like a lullaby since she sampled the song: “London Bridge is Falling Down” by Traditional.

The third track has nothing to do with the first chapter, this one gets sexual. Bea used to have a terrible selfish sexual partner. Now, she gives him a roasting and throws a lot of shade. Bea exposes how bad he was in bed and that she rather motherloves herself than having sex with him again. She also doesn’t want to get used by him only for this one specific activity anymore. “Don’t call me just because you have nobody else. I’d rather lay in bed and motherlove myself”. I like her attitude on this track and the message: to know your own self-worth and be independent. Her vocals aren’t fascinating.

Fortunately, the first ballad appears on the album, I love ballads. Bea isn’t even singing she talks by hitting notes and just sings the word “breathe” sometimes in the chorus. But the instrumentals with the piano and the cello are very relaxing. It’s rather a sad song because Bea is going through a bad time, in which she feels like suffocating and hopeless. The song is like a cry for help. The fact that she doesn’t really sing in this song intensifies this theme. She co-wrote this track with the famous musician Julia Michaels.

In “Like That” Bea finds herself back and realizes that she is a young independent woman. Therefore, she doesn’t let her ex-boyfriend hurt her. She gets stronger with every bad move he makes. “When you treat me like that, when you treat me like that. I only get stronger, I only get stronger”. I like the way how Bea sings this song in a variety of aggressiveness and smoothness. The plain beat also just fits perfectly with her vocals.

Bea is finally moving on after her breakup, but now her ex-lover wants her back. She knows that she can’t trust him anymore. Bea isn’t interested in him or in his human values, her love towards him turned into materialism. All his apologies mean nothing to her, the one thing he can do for her is to buy her diamonds. Because diamonds don’t leave, don’t lie and don’t make her cry. I love the tropical house beat in this song.

“Outside” is a reggae-pop fun song. Bea cares about nothing, she doesn’t wanna go outside. All she does is wasting her time at home and being moody. We all have these days when we can’t get motivated to do something useful or even to leave the bed. This song is exactly about this condition. For this reason, everyone can relate to it. The lyrics are so much fun to read. Her vocals and the instrumentals are on point.

In this song, a new guy wants to be Bea’s new boyfriend, but Bea tells him that she only wants to be his sexual partner and not more. “I don’t wanna be your girlfriend. I just wanna play with your hair, when we get up in the morning I’ll be better on my own, I swear”. Bea didn’t co-write on this track, but she chose it for the album because she likes the melody and the switch of traditional gender roles. In my eyes “Girlfriend” is another song on her album, which represents the message that women don’t depend on a relationship with a man and that they aren’t inferior to men in terms of sex.

Contentwise, the tables have turned, now Bea is the one, who wants her sexual partner to take the next step and recognize their relationship. “I just want some company, when I’m not between your sheets”. She is bored of their current situation. Musically, there is nothing that makes this song special, the chorus is rather monotonous and boring. For me, it’s the first filler of the album.

“Warmer” is such a sensual song, it’ll take you to another world and you’ll probably start daydreaming. I love the mix of her sensitive tender vocals with the slow beat. It’s a satisfaction to your ears. The lyrics keep the content of “Bored”. Bea hopes, they can take their romance to the next level. She sings in the bridge: “Warmer to us, warmer to love, warmer to everything we came here to touch”.

In this song, Bea leaves all her inhibitions behind and supports her own opinions and acts without caring about the consequences and what others could think about her. “I don’t know when I misplaced my own perspective. So now I gotta take back what was mine”. It’s a nice upbeat song, Bea worked again with Julia Michaels for this song. The intro and the beat are very similar to Dua Lipa’s “IDGAF”.

First, S.L.U.T. stands for “Sweet Little Unforgettable Thing”. A hate comment written by a woman inspired Bea to write this song. She doesn’t want women to show hate towards each other. She said in an interview: “I feel like when women tear other women down, it makes men feel like they can tear women down. I just feel like women need to support each other”. It’s an amazing song about self-love and confidence. It is also probably the only song on the album which will make you dance for sure.

In this love song, Bea seems to have found the right man. “I wanna be yours and you wanna be mine and everyone else been a waste of my time”. This song features O’Neil Hudson, if I’m honest I never heard her name before, also in this song, she hasn’t a real part, which she sings. I can only hear her vocals in the background. In my opinion, this song is just another filler on the album. I also find Beas vocals a bit emotionless.

To the Grave ft. Mike Stud

Yes, Yes, Yes. This song is the perfect closure for the album. “Empowering” was the first word that came into my mind while listening to it. Bea sings again about finding yourself and accepting who you are. I love her vocals, the uplifting beat, the lyrics, Mike Stud’s rap part. One of my favorites.

My Tops: Like That, Buy Me Diamonds, Outside, Warmer, Repercussions, S.L.U.T., To the Grave.

All in all, I really like and enjoy listening to this album. But I also think that the album is underrated. Bea did a great job with her team. She co-wrote almost on every song; therefore, it is a personal album and I love personal albums by singers, it’s like reading their diaries. So, go and please check out Bea’s new music, watch the nine music videos to see the visual art and support her. Also, don’t hesitate to share this blog post. Thanks for reading. If you have read so far comment on my last Instagram post @erenblogs the word “Amazing” to let me know. Thanks.